In our first two Tuning Letters of 2009, we had some typos that, if copied and pasted, would have created an error at IPL that could cause incorrect IEAOPTxx parameters to be used.  In order to prevent anyone from using those examples, we are resending both newsletters, each in a separate email following this email.  They contain the same file name as the previous newsletters, so you should just replace the older ones.  The errors corrected in these issues are:

Our thanks go to the following people who first notified us of the IEAOPTxx problems: Bill Orrach from Lockheed Martin, Cliff Langlois from General Reinsurance Corp., and Dan Squillace of SAS.

The fifty-three page 2009 No. 2 Tuning Letter was first emailed to paid subscribers on June 10th.  You may visit our Web site at www.watsonwalker.com to obtain subscription information.  The following is a summary of just some of the contents of this latest Tuning Letter:

SHARE in Austin
As always, there were lots of excellent presentations at SHARE, and a wealth of information was available.  Some of the highlights of SHARE were:

Elsewhere in this Issue
This issue has so much information on so many topics, that it’s hard to summarize them on one page, but here are some of the more interesting items.  •  You’ll find many important APARs described throughout the issue.  (See pages 5, 9, 22, 27, and 39-43.)  •  Several customers had reported slow z/OS 1.9 SDSF response times that should now be corrected.  (Page 10.)  •  Tuned DASD-only logstreams can provide better performance than MANx data sets for the SMF logger.  (Page 10.)  •  Large page data sets can have a negative impact on SVC dumps in z/OS 1.9.  (Page 12.)  •  Nifty new features have been added to ISPF in z/OS 1.10.  (Page 22.)  •  A new IEAOPT parameter has been added for WLM routing services.  (Page 24.)  •  The cooling problems on the system z that I mentioned in a previous newsletter weren’t as serious as originally thought.  (Page 29.)  •  Computer Associates has produced a very neat Performance Handbook for DB2 for z/OS.  (Page 45.)  •  The ITSO is now producing Redguides in addition to Redpapers that are designed for the decision-makers in an organization.  (Page 46.)

IBM issues Red Alerts for especially important APARs, and the most recent one was yesterday.  You may subscribe to their service at http://www14.software.ibm.com/webapp/set2/sas/f/redAlerts/home.html.  In case you don’t subscribe to these alerts, you should at least be aware of them.  Alerts since I last listed them:

I just returned from my four-week residency in Poughkeepsie where I was working on a Redpaper about Mean Time to Recovery at IBM’s ITSO (International Technical Support Organization).  ITSO is the organization that produces Redbooks, Redpapers, technical documents, and now Redguides (see page 47).  Mean Time to Recovery refers to the time it takes to shut down a system, IPL it again, and bring up subsystems so that customers can log on.  We found out many interesting things that I’ll tell you about as soon as it’s published.

Project leaders in the ITSO hold multiple residencies throughout the year, with the usual product being a Redbook or Redpaper.  Announcements about upcoming residencies can be found on the Redbooks Web site at http://www.redbooks.ibm.com/.  Either an IBM employee or an IBM customer can apply to participate in a residency, but the project leader will look for complementary talents that can be used during the project.

I felt very privileged to participate in this project run by Frank Kyne.  (Frank’s an abso-lutely outstanding team leader!)  The other members on this particular residency were all from IBM:  Mark Todd (CICS) came from Hursley, England;David Viguers (IMS) came from Texas; Shulian Yang (DB2) came from China;David Sanders (z/OS) came from Arizona; and Judi Bank (WebSphere) worked from North Carolina.  It was wonderful working with them.

This was one of the best experiences that I’ve had in many years, and for many reasons.  The learning experience was invaluable.  Not only do the team members learn from each other, but they also have the opportunity to meet with developers in each area, plus they get to experiment.  And where else do you get a chance to have a sysplex to IPL (every ten minutes, or as needed)?

That’s really what a residency is all about – sharing what you know, learning from others, and learning by experimenting.  You have to enjoy writing, and it can get a little hectic as the deadline approaches.  We were all able to take away new knowledge from our time there.  Because IBM will pay the living and travel expenses (but not salary), this opportunity can provide an affordable and excellent learning experience.

I had almost finished this newsletter when I went to Poughkeepsie, but was unable to finish it until now.  I apologize for the delay.

P.S.  During May I turned 65 and wanted to see what color my hair really was, so yes, that’s me in the photo below with graying hair.  My picture on the first page is only a year and a half old, but had some help from my hair stylist! 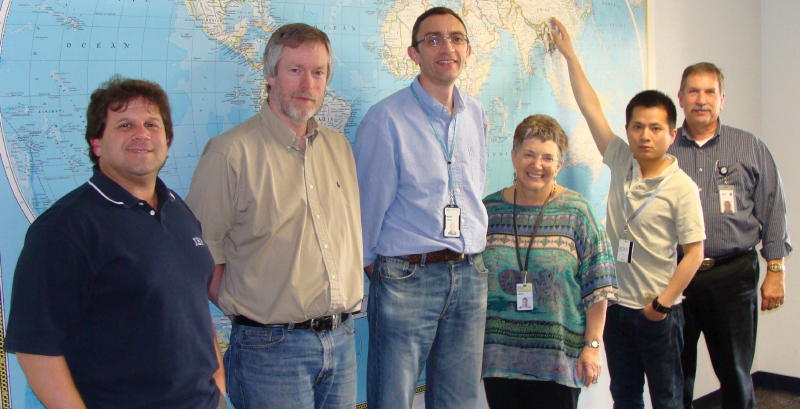 MTTR team (from left): David Sanders, Frank Kyne, Mark Todd, me, Shulian Yang, David Viguers, and Judi Bank.  (Thanks to Shulian for use of the photo.)