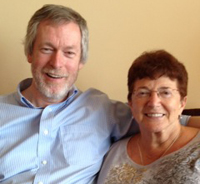 We would like to thank those of you that took the time to complete our education survey. Some of the results were in line with our expectations (overwhelming feeling that face-to-face classes deliver more value than online classes), while others were quite enlightening.

We especially want to thank those of you that took a few extra minutes to add your own comments to the multiple choice questions. Your inputs, insights, and suggestions have helped us build our class plans for this year.

If you have not had a chance to complete the survey, it is still available at https://www.surveymonkey.com/s/DFYZDLH and we are still interested in your input.

We are delighted to announce our first class for 2014. Based on your input to our education survey, the first class is going to focus on the changes to SYS1.PARMLIB in z/OS 1.13 and 2.1, from the perspective of the enhancements in those releases.

Just about every company today is looking for ways to drive more value from their investments and to reduce costs. And what better way is there to maximize your z/OS investment than to make sure that you are fully exploiting all its capabilities that are of value to your company. The objective of our class is to help you do just that.

And, in the popular vein of cost saving, we will be holding the class in the same conference center as the SHARE Summer 2014 conference, on the day before the conference starts – Sunday, August 3. So you can bring yourself up to date with the latest Parmlib changes, but with zero additional travel costs.

Another of our reasons for holding the class immediately before SHARE is to allow you to fine-tune your agenda for the week, so you can meet the experts on the new features that you are especially interested in. And what better way to work up a good thirst for the welcome event on Sunday evening than spending the day with your friends and peers, learning about new ways to bring value to your company?

You can get more information about the class content, as well as information about the enrollment process, at http://www.watsonwalker.com/SYS1.html. To celebrate our first class together, this class has a specially discounted price of $475. So not only do you save on travel costs, you also get to save on the normal class price.

You might be forgiven for thinking that this is a quiet year for mainframers. After all, z/OS 2.1 shipped just last year, and we won’t have the next release until 2015. And all the rumors are that the next generation of System z processors will not be announced until 2015. But that doesn’t mean that the folks in the IBM labs have been spending their time on the beach (much as they might like to!).

As you can imagine, with the mainframe’s 50th birthday happening around this time, there have been lots of related items on IBM’s websites. Some of them hark back to when the mainframe was born (and no one knew what a terabyte was), and others focus on the role of the mainframe in the world of Cloud and Big Data. In fact, the latest buzzword in IBM is CAMS – Cloud, Analytics, Mobile, and Social. Expect to hear a lot more about this over coming months.

And, speaking of the future, IBM recently hosted the final of the Master the Mainframe competition in New York City. 43 young people (all winners of regional events) from six continents were brought together. The winner was a young man, Yong-Siang Shih, from National Taiwan University in Taiwan. Interestingly, the highest placed American was a young lady from the University of South Florida, Mugdha Kadam, with a score of 3031 – a number that might ring a bell with those of you that have been around the mainframe for more than 30 years. You can get more information about the Master the Mainframe competition (and the associated IBM Academic Initiative) at http://www-03.ibm.com/systems/z/education/academic/masterthemainframe/highlights/.

I expect that many of the young people that took part in the Master the Mainframe competition will end up working with CICS. After all, CICS is the most widely-deployed transaction manager on System z. And, despite being with us since 1968, CICS continues to constantly refresh itself and support the latest industry trends and standards. In fact, CICS/TS 5.2 was announced on April 7 and is planned to be available on June 13, 2014. It requires z/OS 1.13 or later. This release addressed over 100 user requirements – quite an achievement for a product that has been around for 46 years! For all the gory details, refer to announcement letter 214-107. A very positive development, and one we whole-heartedly encourage, is an “opportunity to participate in a no-charge trial of the latest developments in CICS TS, without any financial commitment.”

We also had a new version of MQ – WebSphere MQ V8 for z/OS. This is the first new release of MQ for z/OS in quite a while. This new release of MQ contains a slew of enhancements, across the areas of scalability, security, availability, connectivity, and standards adherence. It also requires z/OS 1.13 or later and is planned to be available on June 13, 2014 – the same day as CICS/TS 5.2. I expect that The King’s Head (the local watering hole for the CICS and MQ Development labs) will be rocking that night. For more information, refer to the announcement letter 214-180.

If you would like to stay abreast of what is happening in System z in IBM (and are willing to tolerate a marketing spin), keep an eye on the IBM Mainframe Weekly website.

We received a very interesting email from our friends Alain Maneville and Laurent Sonigoin France, telling us about their experiences with pageable large pages. We will be covering this in detail in the upcoming Tuning Letter, but for now, we just wanted to point out two important APARs that are potentially of interest to anyone that is using pageable 1MB pages – APARs OA44109 and OA44183 both describe situations where a shortage of 1MB frames can result in high CPU consumption. Something to watch out for if you have products that use pageable large pages (in Laurent’s case, it was CICS Transaction Gateway).

Also, we are nearly into June, and IBM has not had a single Red Alert so far this year. This is definitely an improvement over prior years, so well done to the Development and Service people in IBM. I hope that I haven’t jinxed this run of good luck by mentioning it!

5.  Are YOU reading Cheryl’s Tuning Letter?

If your site is a subscriber to the Tuning Letter, make sure you get a copy of the latest issue. If you are not sure whether your site is a subscriber or not, send an email toadmin@watsonwalker.com and we will check for you. We (and our many subscribers) deeply believe in the value of the Tuning Letter, so we want to be sure that as many people as possible get to read it, especially our younger colleagues that will still be using our JCL long after the “more experienced” of us have headed for our beach houses and golf courses.

The Summer 2014 SHARE conference is going to be held in Pittsburgh, Pennsylvania. They are still working on finalizing the agenda, so we can’t give you any insights on that yet, other than to say that both Cheryl and I (Frank) will be presenting.

As an ex-IBMer, I can tell you that IBM takes the SHARE organization and its members very seriously. Despite the ongoing cutbacks in IBM, they always manage to field a team of outstanding developers, support people, and executives. One of the best ways to get an enhancement to an IBM product is if it is endorsed by SHARE and the SHARE members (through the requirements voting process). And while I can’t speak for other vendors, I can tell you that they do an equally impressive job of sending their top technicians to represent them at SHARE and to interact with users of their products.

I can’t think of a better way of building your network of vendor supporters and peer customers than by attending SHARE. Registration is open now athttp://share.org/pittsburgh. I would suggest that you book your hotel early as the SHARE price for the Westin is a significant discount on the normal price, so I expect that rooms will go quickly.

We hope that we will see you there. Which reminds me – in our last Tuning Letter we had a competition question (page 35), with the winner getting to dine at the fast food joint of your choice in Pittsburgh. That competition is still open, so if you want to treat your gastronomic tendencies, send us an email with the answer to our question. Remember, this question does not have any right or wrong answers – only entertaining ones.

7.  What’s in the upcoming Tuning Letter

And, finally, to whet your appetite for the next Tuning Letter, the following are some of the topics that we plan on including. If you are a Tuning Letter subscriber, you will know that we had a survey about the last Tuning Letter (2014 No. 1), asking which articles you found to be the most valuable. We took your input to heart, and will be using that to help us decide what to include in this and future Tuning Letters. Please keep your input coming – the reason we are here is to help you, so the more feedback you give us, the more value we can deliver to you.

I can’t imagine that there is anyone in the z/OS world that doesn’t know Marna Walle from IBM in Poughkeepsie. Marna does a fantastic job at …. well, just about everything. After all these years, I still haven’t figured out exactly what Marna’s job is because she seems to be involved in nearly everything that is related to z/OS.

Just before we sent out this Cheryl’s List I got an email from Marna about a new APAR search function called Granular Search. I just want to make you aware of this new capability and to let you know that she will be announcing it in her SHARE blog. If you don’t already follow her blog, this is just another reason why you should do so. If part of your job is to keep an eye on APARs, I think that you will really like this new function.

9.  Cheryl and Tom in Ireland

Tom and Cheryl recently returned from a 3-week vacation. Here’s their recap from their trip:
We had a wonderful vacation in Ireland. We had learned about an Irish music tour led by Ronny Cox (actor/singer/songwriter) when he was per-forming in Sarasota, and we immediately signed up. The tour visited the southwest counties of Cork, Kerry, and Clare with sightseeing during the day and Irish music at private concerts or pubs in the evening. It was a fantastic tour (especially since we were able to bring our own Florida weather to Ireland)! If you’re interested in a similar music tour, you can find the tours at www.inishfreetours.com.

At the end of the trip Judy and Barry Merrill generously invited us to spend a few days with them in their beautiful cottage by the sea, also in County Clare. Meeting some of their many cousins and friends reinforced our opinion that the Irish are among the friendliest people on earth!

And we can’t thank Frank enough for handling everything while we were gone. Frank and his wife Ann, both true Irish, gave us lots of great advice before we left.

Here we are at Mizen Head, Ireland’s most south-westerly point, in County Cork (notice the sun!): 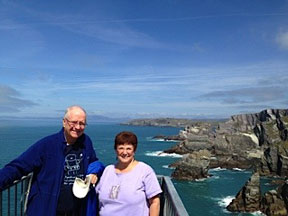