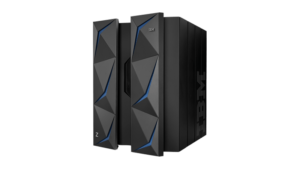 By now you’ve all heard all the marketing hype about IBM’s newest mainframe, the z14. What we’d like to do is look at the announcement from the techie’s point of view.

First, there is a lot of confusion over the difference between the z14 and ‘IBM Z’. This confusion is easy to explain. Prior to the z13, IBM called their line of mainframes the ‘System z’. So ‘System z’ referred to the z9, z10, z196, z114, zEC12, and zBC12. When the z13 came out, IBM renamed ‘System z’ to ‘z Systems’ and added the z13 to the previous list. As a writer, this was a pain in the neck because Word wanted to keep capitalizing it.  ☹ Now that IBM has announced the z14, they’ve renamed the series of all “z” mainframes to ‘IBM Z’. Frank and I often wonder what executives would do if they didn’t spend time discussing name changes. And don’t even get me started on the change of ‘DB2’ to ‘Db2’! I hate to call that insane, but I simply must.

Let me get off my soap box and back to the z14. Most of the marketing is around the “pervasive encryption” available on the z14, and it’s meant to bring the focus of any company back to the strength of the secure mainframe. What this means for the techies is that the executives who write the checks have a greater reason to justify the expense of a new z14. This becomes more of an issue due to the pending May 28, 2018 implementation of the European Union GDPR (General Data Protection Regulation) whereby companies can face fines of up to 4% of global sales if they get hacked. HOWEVER, if they can show that all the data was encrypted, not only do they not have to pay the fine, they don’t even have to disclose that they were hacked. Because this applies to the data of EU citizens, it in effect becomes a global law for any company that possesses data about an EU citizen. We’ll have more about pervasive encryption in our next Tuning Letter.

The Technology Transition Offerings (TTOs) discounts for z14-only sites range from 6% to 21% as compared to the discounts for z13-only sites that range from 4% to 14%. At 2000 MSUs, you’ll get a 5% additional discount if you replace all z13s with z14s. The US announcement letter 217-273 describes the discounts in more detail. The announcement letter gives a list of the z14 manuals, but there are also several z14 Redbooks, including the z14 Technical Guide: http://www.redbooks.ibm.com/redbooks.nsf/pages/z14?Open.

The most important piece of information in the announcement letter is the information about Country Multiplex Pricing (CMP), and this is critical for any customer who has NOT gone to CMP and still has a z196 or z114 machine installed. When moving to CMP, CMP will only handle processors within N-2 generations of the latest model. Today that means that CMP can support the following machines: z13, z13s, zEC12, zBC12, z196, and z114. When the z14 becomes available in September, IBM will offer a 3-month grace period for moving to CMP if you still have one or more z196s or z114s. If you’re planning on CMP and have either of those models, you have two choices: 1) go to CMP by January 1, 2018; or 2) replace the older machines before going to CMP. If you have to move to CMP by 1/1/18, we recommend that you get expert advice because it can prove to be very costly if you move into CMP without help. We can help you with that move, and/or you can come to our Containing z/OS Software Costs class in Sarasota on August 28-30!

This has been just a small part of what we’ll explore in our next Tuning Letter article on the z14 and our z14 CPU Chart, which we’re working on at this moment. We’ll let you know when that’s ready.

On the same day, July 17, 2017, IBM delivered US announcement 217-246 for z/OS 2.3, which becomes available on September 29, 2017. In addition to support for the z14 and pervasive encryption, z/OS 2.3 provides many goodies for everyone. Frank and I will be covering most of these in upcoming Tuning Letters, but we want to list some of our favorites to tease you a bit. Look for more detail in the next Tuning Letters.

One of the most important things to know is that z/OS 2.3 has a new architectural level set (10) and is not supported on a z196, z114, or older CPC, so you’ll need to upgrade the older machines before you can migrate to 2.3. Speaking of old, the announcement also points out that the z/OS 1.13 materials will be removed from IBM’s Knowledge Center on the GA date of z/OS 2.3. For lovers of BookManager, be aware that this is the last release to include z/OS BookManager Read and Library Server base because Knowledge Center is now the strategic platform.

Some other statements of direction (SOD) include: stabilization of DFS/SMB because NFS is the strategic file sharing protocol; last release to provide national language translation in languages other than Japanese; last release to support user keys for system storage (CSA, ECSA, ESQA, SCOPE=COMMON data spaces); and the most interesting of all – stabilization of JES3, with all future development being done on JES2. IBM has not given an end-of-support date for JES3, but you’ll find that this release and future updates are narrowing the number of differences between the two products. We’ll have more about this in our Tuning Letters.

When run on a z14, z/OS 2.3 requires 8 GB of memory (2 GB if a z/VM guest or on a zPDT). This release also provides support for 8-character TSO userids, which is a highly-requested customer requirement. Some of my favorite enhancements are performance improvements for Java, including moving JIT code cache above the bar, and most significantly the new ‘Pauseless Garbage Collection’ (GC) on the z14, which reduces the spike in CPU time and results in lower response times when Java kicks off GC. If you’re using SDSF, you’ll find major enhancements in SDSF with new commands and new displays. You’ll love them!

The z/OS component with the most enhancements is z/OSMF, which has been continuously enhanced since its inception. There are far too many enhancements to list here, but suffice it to say that z/OSMF is the place where all sysprog functions are being moved. Now I’d like to step on my soap box one more time, and try to explain why people should NOT be ignoring z/OSMF. I’m appalled at recent comments on IBM-Main where people say that they’ll NEVER go to z/OSMF. That’s very short-sighted thinking because increasingly more functions are being moved to z/OSMF. Many of the people complaining are getting close to retirement, and turning over their precious sample jobs and procedures is not going to be helpful to their replacements. IBM is seriously focused on z/OSMF and you should be too. Now that z/OSMF is part of the base z/OS, you’ll start to see more IBM and ISV products requiring its use. If you tried it in the past and didn’t like it, please try again. It’s a much-enhanced and integral part of z/OS.

We’ve identified over 150 line items in the announcement, so we’ll have plenty to write about in our upcoming Tuning Letters. As you gain experience with the z/OS 2.3 enhancements, please let us know how effective they’ve been.